As has happened in the last few years, the NV Único Reserva Especial 2021 Release is composed of wines of around 10 years of age, in this case 2009, 2010 and 2011, with 2011 being the Único vintage released at the same time as this non-vintage blend. It's a tribute to the tradition and the past times, a blend of mostly Tinto Fino, the local strain of Tempranillo from Ribera del Duero, and a little Cabernet Sauvignon where they look for the balance and house style by blending different vintages of Único. There are many similarities with the 2011, which can represent about one-third of the blend. There's a little more development in the aromas, some of those ripe but herbal aromas and a powerful palate but without the elegance of the 2011 vintage bottling, which has more stuffing in the mid-palate. It finishes dry, with some tannins. It's certainly younger and fresher than the Reserva Especial from yesteryear, and they are now trying to hold onto some wine to again give it some older components like in the recent past. 16,916 bottles and 257 magnums produced. It was bottled in June 2017. - Luis Gutiérrez, Dez. 2020
Details
Weitere Empfehlungen für Sie 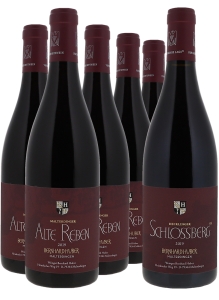