Already the bright color of the 2013 Kiedricher Gräfenberg Riesling Auslese indicates great aging potential that is confirmed both on nose and palate although the wine was still restrained when I tasted it end of October 2014 what made it hard to score correctly. The nose was floral and very subtle but also somewhat closed displaying fine honey flavors but less fine aromas of English wine gum and catmint. On the palate the proud Gräfenberg Auslese was very intense, sweet, piquant and elegant but also somewhat milky and less precise or laser sharp than it could be. That specific day I clearly favored the Turmberg Auslese but also noticed the Gräfenberg was better developed one hour later when I had to leave for my next appointment. It was picked with with 130° Oechsle and ended up with 145 grams per liter of residual sugar and 8% of alcohol with a total acidity of 10.6 grams per liter. - Stephan Reinhardt, Jan. 2015
Details
Weitere Empfehlungen für Sie 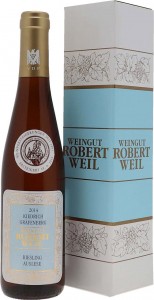